Wikipedia will be turning 20 this week on the 15 January and to celebrate a number of events have been organised both in South Africa and globally.

Wikimedia South Africa will be celebrating this birthday by encouraging more people to edit and contribute their knowledge to Wikipedia in general and South African languages in particular. Today Wikipedia is available in almost 300 different languages including almost all official South African languages including isiXhosa, isiZulu, Sepedi, Sesotho, Setswana, SiSwati, Tshivenda, and Xitsonga. By editing Wikipedia you will be participating in the largest free knowledge movement in the world. Making it easier for people everywhere to learn more about important things that you are knowledgeable about.

Activity Report 2019
Want to see what Wikimedia South Africa has been up to in 2019? Then check out our Activity Report 2019. In 2019 Wikimedia South Africa hosted 14 events that resulted in 873 new Wikipedia articles created, 15,800 articles edited, and 1,750 new references added by 414 project participants. These new articles and edited articles have been viewed 386 million times as of the 17 March 2020. If you are interested in joining the chapter to help out with future projects and make free knoweldge a reality in South Africa then please contact us.

I write today on behalf of Wikimedia South Africa, the volunteer driven non-profit chapter for South African Wikipedia, the free online encyclopedia, editors and free knowledge contributors. As volunteers in the Wikimedia movement, we understand the important role that access to knowledge plays in South Africans’ lives. This is why we have spent the last 6 years advocating for amendments to the South African copyright act which will allow South Africans to fully participate in free knowledge. These amendments now sit on your desk as a part of the Copyright Amendment Bill, and I ask today that you sign this bill into law.

One of the most important inclusions for free knowledge in this bill is the codifying of fair use in South Africa. Fair use, and its less expansive counterpart, fair dealing, have been adopted by countries around the world to empower their creators, educators, journalists, and innovators. Fair use, which allows for the use of a copyrighted work for certain specific social beneficial purposes like criticism, reporting, and education. One of the largest test markets for fair use is the United States, where citizens have been benefiting from these laws for years. Some examples of fair use in the United States include: critics using stills or clips from content they are criticizing; investigative reporters telling their stories using primary sources; and artists building their work on foundations laid by prior generations.

We understand that there have been criticisms around the inclusion of fair use in the Copyright Amendment Bill, with claims that the new bill means that South Africa cannot adequately protect foreign copyright interests. We respectfully disagree. A lack of fair use in our laws only serves to further a status quo where the rest of the world can freely use and benefit from the work of South African creators, but South Africans cannot do the same. Fair use, at its heart, protects publicly beneficial uses of copyrighted works. The introduction of fair use in this bill will simply allow South Africans to be better protected when they choose to use both domestic and foreign copyrighted works in their art, criticism, reporting, and research the way others have been doing across the globe for years. On Wikipedia, fair use plays an important role in contextualizing facts, and illuminating knowledge. At Wikimedia South Africa, we want South Africans to be able to share their knowledge with the world, and fair use is an important part of that.

We are also thrilled that the bill has included provisions which codify freedom of panorama in South Africa. Freedom of panorama is a copyright principle which allows for the photographing of artistic and architectural works in public spaces. Currently in South Africa, taking or sharing photographs of public spaces which contain statues or memorials are technically in violation of the author of that work’s copyright and could result in a lawsuit. This means that many markers of South Africa’s vibrant and important history legally cannot be shared by its own citizens online. Worse, because copyright lasts 50 years after the death of the author, no post-apartheid statues or monuments may be photographed and shared online legally in South Africa, leaving a literal blind spot in our nation’s visual history online. As Wikipedians, we understand the importance of documenting our history and sharing South Africa’s rich culture with the world, which is why we believe freedom of panorama is such an important inclusion in South Africa’s amended copyright law. 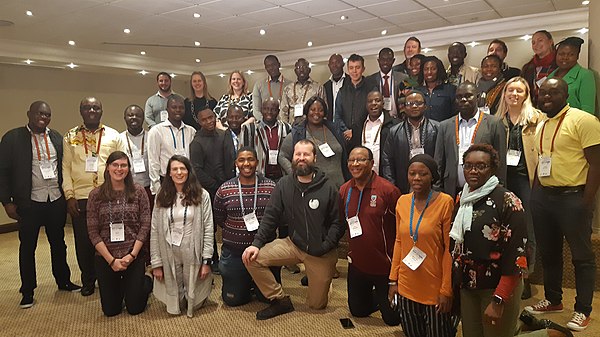 From the 6th to the 8th of August 2019 Wikimedia ZA co-hosted the African Climate Change edit-a-thon. The event was held in Cape Town in partnership with the climate change NGO South South North. The event saw 40 climate change experts and scientists from across Africa being trained how to edit Wikipedia and improve climate change related articles on Wikipedia. Three veteran South African Wikipedia editors were on hand to teach and coach the participants in the process of contributing to Wikipedia. The event was prompted by the lack of climate change related articles on Wikipedia related to Africa. Wikimedia ZA would like to thank all the organisations, individuals, and Wikipedia editors (both online and offline) for helping to make this event possible.

More information about the event can be found on meta.wikimedia at the Africa Climate Change edit-a-thon event page 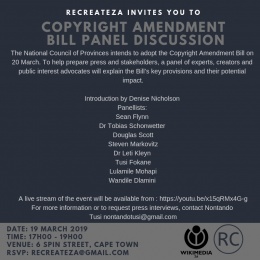 ReCreate South Africa in partnership with Wikimedia ZA will be hosting a panel discussion on the impact of the South African Copyright Amendment Bill currently before parliament. The panel will consist of Copyright experts, legal scholars, civil society groups, and others who will be impacted by changes to copyright law. This panel discussion will feature:

Wikimedia ZA supports the current version of the Copyright Amendement bill before parliament as it contains allowances for both Freedom of Panorama and Fair Use.

Wikimedia ZA will be trying to steam the event over YouTube which can be seen live on the day at the link below.

Event details
The event will happen:

Refreshments and finger food will be served at the venue.