The Etherpad for this meeting can be viewed here.

Survey results were summarised on an infographic and gave us a good idea of what the SA community looks like. The average editor is a 30 year old, white male with an interest in technology and a University degree, either living in Cape Town or Johannesburg/Pretoria.

The infographic was on display at Wikimania where fellow Wikimedians showed a lot of interest in the statistics and requested assistance with compiling a similar questionnaire. An additional infographic for Afrikaans was also created.

The survey assisted us with key answers to questions such as how we can improve contributions to Wikipedia in certain areas of SA. This information was very information for future possible projects.

Question 29 asking the question about what the Chapter can do to encourage editing was in general a question of visibility - responses included a Facebook page, public events, banners for editing WP. It is agreed that we should be careful of banner fatigue. Theresa to distribute a copy of the survey questionnaire analysis to the board. People specifically asked for paid advertising. This should be discussed with the Foundation. It is further agreed that we should use the survey data in our grant applications to the Foundation. There was also a request for partnerships. Although there are already activities in place, not everyone is aware of it. The focus is to create awareness among existing editors.

Local meetups usually have a good turnout so it is agreed that meetups will be arranged in Johannesburg as well. Pria will steer this with the help of Dumi and Bobby. These meetups are held every three months on the first Sunday of the month. These meetups are advertised with a local meetup page on meta with details of the event. It is important to inform people of the meetup two weeks prior to the event. Banner ads can also be used for this purpose. The next meetup will be held on 6 September in both Johannesburg and Cape Town. Running meetups in these two cities will create opportunities for synergy. There is also an initiative that we would like to implement - Wikinics where you can invite the whole family to a picnic where editing is done via mobile units.

Douglas will be attending a conference on Copyright reform on the 11th of August. Wikimedia ZA wants to highlight issues surrounding freedom of panorama and limitations when copyright expires, particularly with photographs used on Commons.

Membership numbers have increased drastically. A big thank you to Deon for his efforts in involving the Afrikaans community with the Chapter.

Another issue raised by the survey was the use of syntax for new editors. It is agreed that this makes a good case for people to learn via the visual editor tool. It is however noted that people are not aware of this tool. We can do them a great service by informing them of this tool and by activating the use of it. This option can be used at edit-a-thons to show new editors how to go about editing. The idea is to start people off with a user name, they have to then write something in their sandbox. After this, they activate the visual editor. By doing it this way, you expose users to both options. The mark up text exists as an option, but visual editing makes it easier for people to join and keep editing. There have also been commitments from schools in Israel who take a day off school to edit Wikipedia. They find it interesting and part of this is playing wiki adventure. This is an option we need to investigate.

It has become apparent that there is a deficit in our budget of approximately R60,000. This has been brought to the attention of the Foundation. The discrepancy will be investigated by an appointed auditor which will be used to do monthly bookkeeping. The Foundation has agreed to pay outstanding commitments directly on our behalf. There have conducted an audit and the theory is that this deficit is a historical legacy where we have either not budgeted correctly or where we have carried forward grants from one to the other. Theresa to send Dumi the calculations done by herself and Douglas so that he can compare it with the sheet he has. Other things to keep in mind are interest and inflation which could have also contributed to the problem.

One thing we need to clarify is also the cost of bank charges. If the Foundation requires us to have two separate accounts, we need to clarify who carries the banking charge costs. It is agreed that these costs should be built into grant applications.

As from 1 August the Administrator will only be working 3 hours a week on WMZA activities. Theresa's duties will be as follows :

Project leaders will be responsible for their own project management including media statements etc. Theresa will send these out via e-mail. She will inform the board of when she is available to assist. Theresa is requested to keep a monthly timesheet. Exceeding the 3 hours per week will have to be approved prior to payment.

Our request to register for VAT has been rejected because Douglas is not registered with SARS as a human being but as an estate. Douglas to find out what the issues are and address it with SARS.

There was a prize giving event for the writing competition which had very interesting statistics. 25 schools were invited to participate and we partnered with Conhill Edu. WMZA provided the context for editing. Only 5 actually submitted articles but they are of good quality. We still need to see what the survival rate is. We are very confident about the future of this partnership. Our expenses were low as they contributed a great deal to the events.

Joburgpedia was originally going to be a Wikitown context, but then we found that creating plaques locally would be too expensive. We wrote to the City of Johannesburg advising them that it was not viable to continue with this project. After an 18 month waiting period, they have now agreed to support the project. They will source plaques which will come standard with a QR code which links to the relevant Wikipedia article.

Another contribution is that they promised R 40 000 for catering. The agreement was that they would supply the food instead of making the payment to the Chapter. This was for 3 events. It is highlighted that this government procurement system created a conflict of interest for us as the general consensus was that suppliers were over charging, and that the supplier was the same person who approved the allocated amount.

We want to expand on our partnership with the Johannesburg Heritage Foundation. They have 500 newspaper articles that they want to make available, including other research material that we can get access to. Bobby and Dumi will work on this grant application. The project currently has three partners on board - ConHillEdu, City of Johannesburg and the Johannesburg Heritage Foundation. The Geother Institution is also interested in sponsoring some activities in SA. This will include edit a thons, venues, catering and internet. Dumi and Bobby to arrange a meeting with them to discuss. They have a huge online community and can be a powerful partner. Bobby to steer the project.

This could be the last year of the competition in ZA as it is spiralling down. We might want to consider Wiki does Earth next year. We have appointed an intern with the grant from Heritage Western Cape who will be sorting out the database on Wikipedia of heritage locations in the Western Cape - and then of other areas in country if there is time left. We interviewed 3 candidates, of which one was really interested in public heritage. We invited her to be an intern for this project.

Deon and Theresa will have a meeting with stakeholders on Wednesday the 12th. Comments from the Foundation were about the amount of money requested for such a project but it was agreed that our projects in SA should not be compared to other countries where most of the activities are sponsored. More information on this project will follow and will be headed by Deon.

Ran out of time, not discussed. 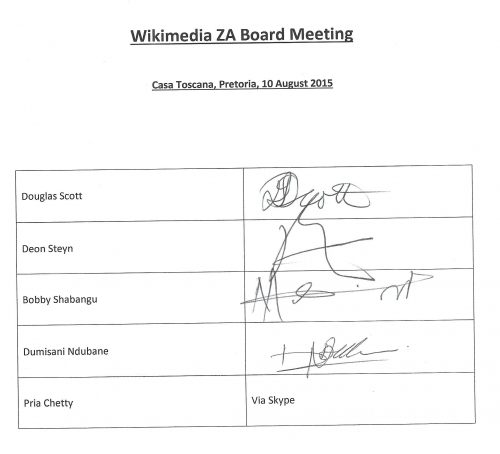